During the first week of April I was in several root pits in northwest Indiana and boy did we find plenty of interesting factoids! I was assisted by Eileen Kladivko from Purdue University on one day and Barry Fisher, Indiana NRCS State Agronomist, on another day.

What We Found in the Cover Crop Root Pits

The farmer from our first cover crop root pit dig on April 4th reported that he saw less visible drought stress where they had long term no-till and cover crops, attributing the healthier plants to increased root depth.

We saw several fields of cereal rye after corn stalks being grazed by beef cattle.

Barry Fisher encouraged everyone to “expand your farm vertically.” In other words, don’t just keep buying/renting more land. Instead, put cover crop roots down deeper to create better land where you farm – and get more yield.

Farmers are becoming more creative with cover crop applications and types, and they are finding success – not surprising!

In late September of 2011 I was walking in our family corn field in central Indiana–in the pouring rain. Following the wettest spring in the eastern corn belt in 100 years we had a summertime drought that saw less than 2 inches in July and August combined. In that same time period we had 32 days above 90 degrees.

On this September day we were having rain…3 inches worth of glorious rain! I threw on my rain coat and Tingley boots, grabbed my shovel and went into the corn field where our cover crop plots had been planted in the fall of 2010 and killed in May 2011. As I walked through the field I noticed that where the soil had been tilled (see previous blog post) I was seeing dry soil underneath my boot track! Now catch the scene here…no rain for much of 60+ straight days…now a 3″ rain and virtually none of the moisture getting into the soil! Literally I had less than 1/2″ of the soil depth that was moist! Dry footprints followed me all the way to the end of the field. I was not happy.

When I reached the area where the cover crop test plot was (that area was not tilled this spring) I dug into the check area that was no-tilled yet did not have a cover crop. In that area I dug into the soil and I found moisture 2 1/2-3 inches deep. This area was now no-tilled for 23 straight years. That made me feel better.

Then I dug in the area that had been no-tilled for 23 straight years and had a cover crop the previous winter. I was very pleased when I dug in the areas where we previously had annual ryegrass and cereal rye and found moisture had filtered (penetrated) in 7 (seven) inches deep!

Watch these videos on what I found when digging for earthworms in this sections with cover crops and no-till and where there was tillage without a cover crop. I believe we have an additional answer to why I had so much better infiltration where I had the cover crops..earthworms and roots!

Yet, I wondered, why did the moisture stop at 2 1/2-3″ in the no-till plots? I found the answer from a rogue radish. We had a few radishes that came up in the field that had been planted in the fall of 2010 (the fall of 2010 was so dry that many of the radishes did not come up until very late…or not until spring, or in a few cases until mid-summer).  As I previously wrote, Radish does have some hard seed.  I dug around one of the radishes and found a constriction in the radish at 2 1/2-3″ deep! Even after 23 years of no-till I still had a compaction problem! I believe that is one reason why cover crops help producers to transition from conventional tillage to no-till…cover crops penetrate through compaction layers.

I had a “see it to believe it” moment in late August near Stryker, Ohio (Williams County – NW Ohio).  A very long and deep root pit had been dug as Frank Gibbs (Ohio NRCS Resource Soil Scientist) was looking for the tile in a continuous no-till corn field.  I’m thankful that the tile was not easily found because we found pretty remarkable “things” going on in the soil beneath the soil.  What were those “things” we found?

Watch the Frank Gibbs video to see how special cover crops and no-till make a tough soil a healthy soil!  Frank does some pretty incredible work that shows the value of having a healthy soil.  Now, watch this second video of the smoke test results.  I have seen this test three times and NEVER seen it this awesome!

Frank says in the video that often times that the corn roots would “be turning out” when they hit the lake bed soil.  But because of cover crops and no-till the earthworms had plenty to eat for much of the year and the soil was very healthy compared to similar soil types in NW Ohio.  Obviously these roots did not “turn out”…they kept going down all the way to over 5 feet deep! 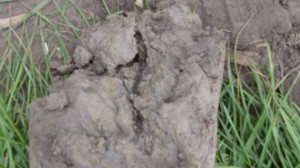