Many farmers attending the meetings had at least some experience with cover crops and those that talked to me personally had very good experiences.  It was fun to talk to farmers that are excited about both soil health and profitability.

At the meeting in Sparta, Agri-View Newspaper Crops Editor, Jane Fyksen was present and taking notes for a story she was writing for the publication.  Jane did a great job in her reporting of what I said.  I want to share those articles with you.  The first article is entitled “Finding a cover crop mix to fit every need” and the second one is entitled “Aerial and overseeding of cover crops: Making it work“.

I have conducted over 40 cover crop talks this year from Omaha to Ontario and from Syracuse, NY to Chippewa Falls, WI.  I am amazed how far this cover cropping idea has come.  I am also very excited to see what will happen in another 8-10 years.

Fact or Fiction? Cover Crops that Survive the Winter Keep the Soil Colder in the Spring than Fall-Tilled Soil

This is a question I get over and over again.  And most of the time it’s not really a question. It’s actually someone stating to me why they are not going to plant cover crops. But is it really true that a surviving cover crop will keep my soil colder than a conventionally tilled soil?

Several years ago in March I stopped at a cover crop test plot on the Indiana/Ohio border.  While I was there I checked the soil temperature where cover crops had survived (Annual Ryegrass and Winter Cereal Rye) to see if it was indeed colder than the tilled soil that surrounded the plot.

What I found was a bit surprising considering the conventional “widsom” I commonly heard.  The soil temperature at 4″ depth was warmer by 1-2 degrees where we had a surviving cover crop than in moldboard plowed dark soil.  I sampled on a sunny day when the temperatures were in the 40’s.

This spring my brother Don Robison is taking soil temperatures and photos of a soil thermometer from our home farm near Greenwood, IN. He started taking these photos on March 29, 2013.  The plan is that Don will take soil temperatures for four or five consecutive Fridays – in annual ryegrass, in no-till soil (that has some winter annuals present), and in fall tilled soil.  And since March of 2013 has been quite cold when compared to recent years, the results should be interesting.

Results Will Be Recorded

Do Your Own Experiment

Send me temperature readings and photos (phone camera quality is fine) and I’ll compile some data from different parts of the country (world) and pass the data along.  Please let me know your soil types and general weather conditions when you send in your reports. 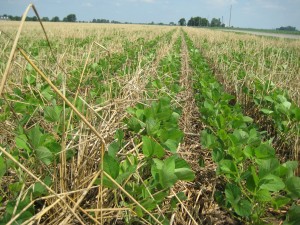 I often hear folks saying that farmers should be careful planting into cover crops. There is fear that:

Well, here we are after one of the wettest Springs in the Eastern Corn Belt history and we have had challenges getting the crop in.  But getting a good stand planting into cover crops has NOT seemed to be a problem.

In the Fall of 2010 I conducted a test at  Robison Farms near Greenwood, Indiana.  My brother Don and I simulated aerial application of 9 different cover crop entries (mixes and straight species).  While we had very little rain in the Fall until late October, we had excellent winter and spring growth on most of the non-irrigated plots.  We had the same plot entries in a different part of the field that received 3″ of irrigation (weekly applications of 0.5″ rain for 6 weeks) and all of the cover crops did very well in those plots.

Stand establishment results were very positive towards no-till planting into cover crops as we look at the Robison Farms results.  My take home is that in an exceptionally wet year we did not lose any stand because of the cover crops.  In most areas we actually held steady or improved (slightly) compared to the no-till without cover crops.  Slugs?  None. Cannot get them killed?  I’d say better than 99% kill rate…and less broadleaf weeds in the cover crop plots.

What was your experience this year? I’d love to hear from you.

Here is a video that shows what my brother Don and I observed.