In late June I was on a farm in west central Wisconsin with two farmers that had over 3,000 of their nearly 6,000 acres that were too wet to plant in 2013.  This is an example of what I have seen and heard and read on personal farm calls, numerous phone calls, and multiple e-mails that farmers have asked for advice on “what to do.”

On my way home from that on-farm visit I called Ryan Stockwell from the National Wildlife Federation. NWF has been a great friend to agriculture and cover cropping.  I wanted to see what Ryan was hearing about potential changes in RMA Crop Insurance rulings for the upper Midwest – so farmers might be able to harvest their cover crops (or alternative forages) from their prevented planting acres before November 1, 2013.  What I heard from Ryan was not good news for the livestock producer that is desperately short of feed because of the drought of 2012 and severe alfalfa winterkill during the winter of 2012-13.

As I lamented to Ryan how I thought that there should be some “flexibility” in the crop insurance regulations, it hit me that farmers could possibly make more money harvesting forages and NOT taking their crop insurance payment.  That is when we got Sarah Carlson (Practical Farmers of Iowa) and Tom Kaspar  (USDA-ARS National Laboratory for Agriculture and the Environment in Ames, Iowa) involved.

My marking numbers on a notebook I began while driving down I-90/94 tuned into a full fledged article that was well beyond my expectations. Thanks to Ryan, Sarah, and Tom for making this a scientific article that more than solidified my idea and well exceeded my abilities.  You guys are the best!

Over the past few weeks I have heard from countless farmers in Wisconsin, Minnesota, Illinois, Missouri, Michigan, and Iowa that are considering taking prevented planting on all or parts of their farms. Growers Edge just published an excellent piece Prevented Planting Guidelines.

Cover Crops and Crop Insurance issues seem to be heading to a collision course again this spring in much of the Midwest.  In the Corn Belt wet fields have prevented planting with less than 10% of the corn planted by May 5 across the major corn producing states.  In the Upper Midwest and even into Oklahoma and Arkansas 2-19″ of snow fell the first week of May.  Dairy farmers are desperate for forage and up to 75% of the alfalfa in Wisconsin and Minnesota winterkilled.  Many of those dairy farmers planted cover crop Winter Cereal Rye with hopes of harvesting Ryelage this spring to get some emergency feed after the devastating drought of 2012.

The cold, wet spring of 2013 is causing problems

But the cold wet spring (coldest on record in USA since 1975) may have farmers in a pinch with RMA again despite the Special Provisions for cover crops to the common crop insurance policy for the 2013 cropping year.  As of May 8, 2013 the Rye is only around 10″ tall in most of Wisconsin…certainly not ready for harvest by the May 10 RMA cut-off for harvesting and still attaining crop insurance.  Even in Indiana the cover crops are ‘exploding” into head after an exceptionally slow start to spring.  The fact that these fields are not full of winter annuals that are headed out like neighboring fields should be applauded…so should fields with cover crops be penalized?  It appears that farmers in the Upper Midwest have to choose between feed and crop insurance.  In much of the Corn Belt the fields are still plenty wet.  It is interesting that in some states the fields full of weeds qualify for crop insurance…yet fields with cover crops that have seed heads (instead of weeds with seed heads) do not qualify for cover crops.  Go figure.

Please check with your crop insurance agent to see what regulations apply to you. 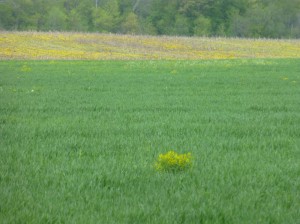 Should farmers be penalized in a wet and cold year for growing a cover crop instead of having a field of winter annual weeds?  Common sense says that a cover crop is better for agriculture than weeds.

If you have cover crops that live through the winter and also take out Federal crop insurance there are some documents that are important to review.  Most of us have some level of understanding or experience that using cover  crops is a sound agronomic practice that helps our farms become more profitable.  Most of you also take out crop insurance on many if not most of the acres you farm.   Are there special considerations that folks using cover crops need to know this spring?  Take a look at the following documents for the best help.  The documents to review are: InsuranceCoverage_CoverCrops – 2011 – all 4 states and  2011 Cover Crop Fact Sheet Springfield along with Special provisions. These documents are for IN, IL, OH, and MI.  Please visit with your local crop insurance agent for the documents that apply to your region if you live outside these four states.

The important date is May 15.  Please read the documents closely to see the importance of this date!