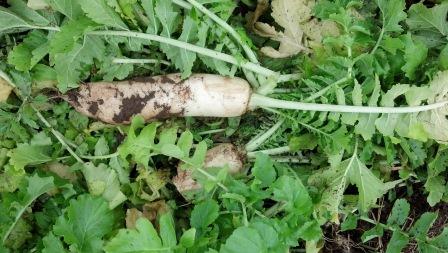 CISCO Seeds, Robison Farms, and Dougherty Fertilizer are sponsoring a Cover Crop Field Day and Root Dig at the Greenwood, Indiana farm. If you’ve not had an opportunity to see cover crops in a real life farm setting, this will be a great meeting for you . There will be multiple species available to look at and expert agronomists on hand to answer questions.

If you have questions or need further information contact  Don Robison at donrobison@ciscoseeds.com or 317-357-7013

To see different species of cover crops in a real to life situation. This was a soybean field that had the cover crops applied over the top of the standing crop at roughly 50% leaf drop.

Species You Will See

Now that the radish tops are wilting and the peas and annual ryegrass are falling closer to the soil surface you can see the radish tubers more easily.  From the radish tubers I believe we can now see how much nitrogen is being produced from the crimson clover and Austrian winter peas.  Now, this is NOT scientific…but it is pretty obvious that the radishes were considerably larger where there was more crimson clover.  I’ll be posting videos so you can make the observation for yourself.

For your information, the Mixes we are looking at on this post have similar species (different varieties) at different rates/species in the mix.  The first video has more annual ryegrass than the mix in the second video.  The second mix has more crimson clover and also one more pound per acre of the radishes,  So the big difference is in the amount of clover in the mixture.

Now, I’m not saying one mix is better than the other.  It really depends on what your goals are.  In mix #1 there are more deeper roots because of the annual ryegrass.  In mix #2 there appears to be quite a but more Nitrogen being produced (therefore larger radishes-even though there are more radishes to feed).  Mix #2 has approximately 10# of Bruiser annual ryegrass, 7# of AU Robin Crimson Clover, and 3# of GroundHog Radish.  Mix #1 has approximately 15# of Bounty Annual Ryegrass, 3# of crimson clover (I don’t know if it is VNS or a variety)  and 2# of Tillage Radish per acre.  Both mixes have outstanding radishes, outstanding annual ryegrass and I know mix #2 has an outstanding crimson clover.  So it’s not like one good mix and one bad mix…both are good.

So, which mix do you want?  Do you want more nitrogen?   Or do you choose less nitrogen but 5# more annual ryegrass for additional deep roots?  Let me know what you are looking for!