Almost two years to the day I posted an article about Killing Tall Annual Ryegrass.

The problem of a wet and chilly 2011 has resurfaced an ugly head to be a wet and COLD spring of 2013. But over the past week or so temperatures have warmed into the 70’s and 80’s with cover crop annual ryegrass and winter cereal rye having grown tall in some areas of the Midwest. Producers need to kill their cover crops as soon as possible to comply with RMA regulations.

What about the surprise cover crops?

In a previous post I wrote about dormant seed in cover crop species on our home farm.

I showed how radishes were present in soybean fields and how annual ryegrass was coming up even after there was residual herbicide and burndown herbicide applied.

Now here we are in the spring and we have a few new surprises.  Fall 2011 planted annual ryegrass and even fall planted winter cereal rye are now growing in the spring of 2013.  These cover crops were fully terminated in the spring and summer of 2012; there was effective weed control.  So dormant seed has germinated and now grown a full 15-18 months after it was seeded.  So yes, cover crops can become weeds.

So what does this matter?

We have the benefit of a “thin” cover crop and we did not have to pay seed cost or application cost for the second year.  In our farming situation it is not a big deal.  We terminated all of our cover crops and weeds with a “hot” chemical mix.  It is a mix similar to what we used in our no-till fields prior to glyphosate coming on the market.  However, if we were growing wheat or oats or barley for grain and straw it could be a problem.  Thankfully there are now chemicals to use in cereal crops to eliminate annual ryegrass.  I hear reports that Jamie Scott from northern Indiana has seen excellent results with this practice.

What do we do now?

We enjoy the benefit that we have from the cover crop (even though it is a sparse stand) and we watch to make sure we do not have any cover crops coming back before harvest. The cover crops are now dead and a residual herbicide is applied.  Now we wait to plant the corn and soybeans and scout for any additional dormant seed to germinate and grow.  A clean harvest is important to all producers.  Our goal is to use the information from our own farm to make sure that farmers understand the rewards that cover crops bring and also the risk that comes with the reward.  The risk is not huge and it is manageable, but it is risk none-the-less.

Fact or Fiction? Cover Crops that Survive the Winter Keep the Soil Colder in the Spring than Fall-Tilled Soil

This is a question I get over and over again.  And most of the time it’s not really a question. It’s actually someone stating to me why they are not going to plant cover crops. But is it really true that a surviving cover crop will keep my soil colder than a conventionally tilled soil?

Several years ago in March I stopped at a cover crop test plot on the Indiana/Ohio border.  While I was there I checked the soil temperature where cover crops had survived (Annual Ryegrass and Winter Cereal Rye) to see if it was indeed colder than the tilled soil that surrounded the plot.

What I found was a bit surprising considering the conventional “widsom” I commonly heard.  The soil temperature at 4″ depth was warmer by 1-2 degrees where we had a surviving cover crop than in moldboard plowed dark soil.  I sampled on a sunny day when the temperatures were in the 40’s.

This spring my brother Don Robison is taking soil temperatures and photos of a soil thermometer from our home farm near Greenwood, IN. He started taking these photos on March 29, 2013.  The plan is that Don will take soil temperatures for four or five consecutive Fridays – in annual ryegrass, in no-till soil (that has some winter annuals present), and in fall tilled soil.  And since March of 2013 has been quite cold when compared to recent years, the results should be interesting.

Results Will Be Recorded

Do Your Own Experiment

Send me temperature readings and photos (phone camera quality is fine) and I’ll compile some data from different parts of the country (world) and pass the data along.  Please let me know your soil types and general weather conditions when you send in your reports.

Kura Clover is an interesting option for cover cropping no-till corn producers. Why? Because Kura Clover forms a “living mulch.”

I have been working with Dr. Ken Albrecht from the University of Wisconsin-Madison on Kura Clover since the summer of 2000.  During that summer as I traveled through eastern Iowa and NW Illinois I envisioned that before 2005 all of that region would have Kura Clover on it!

That never happened. But I am still very excited about Kura Clover as a feed source and cover crop.

What’s so great about Kura clover?

Why hasn’t Kura clover taken over the cover crop/forage world?

State and local Soil and Water Conservation Districts have been a wonderful partner over the past 4 years in helping to educate farmers about the value of cover crops in their local area.  Over the past four years Indiana SWCDs have planted or overseen over 300 cover crop test plots.  Recently the Noble County (Indiana) Soil and Water Conservation District held a field day where they did a great job of educating area farmers on the benefits and applications of cover crops for their county.

First, they put together a cover crop information sheet showing the various seeds and mixes that can be planted, as well as the seeding dates for their area.

Second, they provide a list of local suppliers for seed, herbicides, and applicators.

But most impressive is the test plot they put out. Working with a local farmer, they seeded 9 different plots, along with a “check” plot, which had no cover. They purchased the seed from Ag Plus, which is located in Columbia City, IN.

Below are pictures from the plot, which were taken on October 11, 2012. The plot was seeded at 3/4 inch using a drill – on August 24. Stacey McGinnis, from Noble County SWCD noted that quite a lot of volunteer wheat came back up and the ground was fairly compacted (soil is a silty clay loam). On Monday, October 8, there was a killing frost.

Below are the pictures from the plot, along with a brief explanation of some of the benefits below each picture. You can click on the picture to see a larger version. Also, hover your mouse over the picture for a quick description. 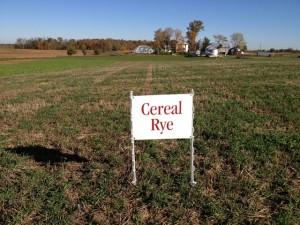 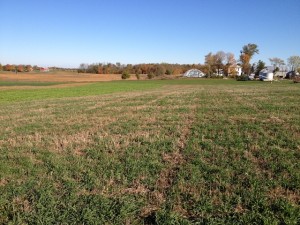 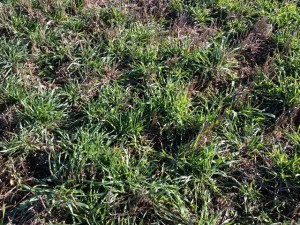 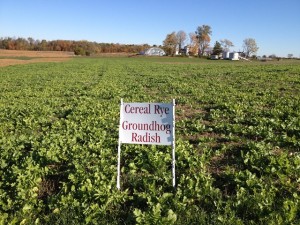 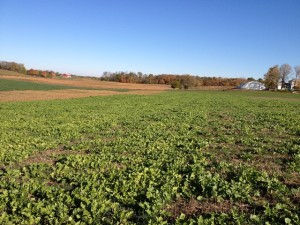 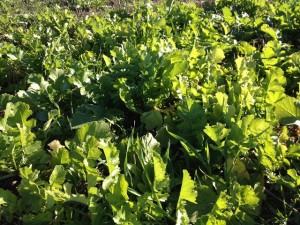 With winter rye and radish mixed together, you get: 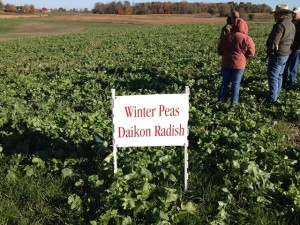 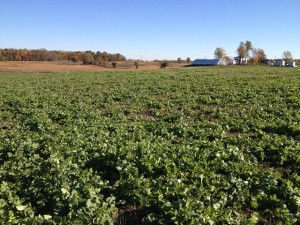 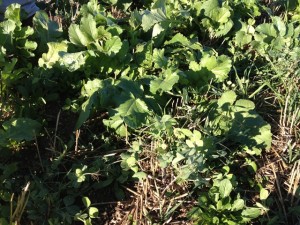 Along with the advantages of the radish, Austrian winter peas produce nitrogen for the next crop. So, by mixing these two together, you have a nitrogen producing and nitrogen scavenging environment all mixed into one. 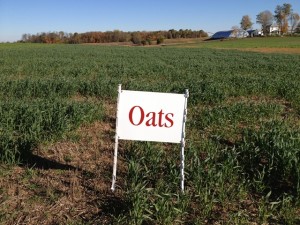 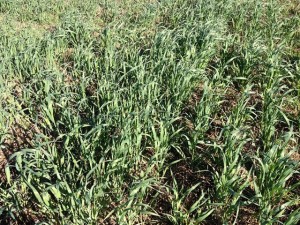 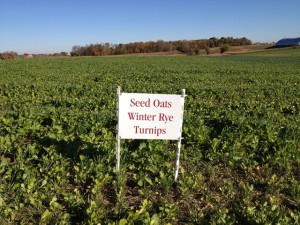 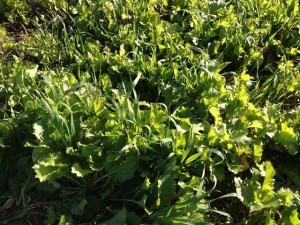 This mixture of oats, winter rye, and turnips has several advantages for livestock producers. The oats produce a tremendous amount of forage for the fall, while the winter rye will over-winter and give you more forage for the spring. The turnips adds a lot of protein for the livestock, but are also very capable nitrogen scavengers themselves. 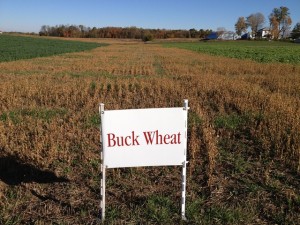 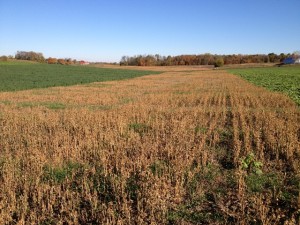 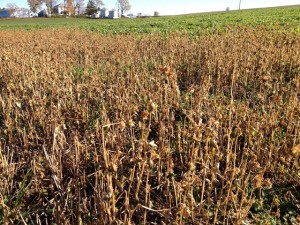 Buckwheat is a useful green manure crop. It can produce significant amounts of dry matter. Up to 3 tons of dry matter per acre has been obtained after 6 to 8 weeks of growth on relatively unproductive land under Pennsylvania conditions. When plowed under, the plant material decays rapidly, making nitrogen and mineral constituents available for the succeeding crop. The resulting humus improves physical condition and moisture-holding capacity of soil. Where a second crop of green manure is desired, rye may be drilled into the buckwheat stubble and plowed under in the spring. The rye frequently can be drilled into the buckwheat stubble without previous disking or plowing. Buckwheat green manure may also fit into fairly tight rotations such as when a crop is harvested prior to mid-July and a succeeding crop is not scheduled until fall. If volunteer buckwheat is harmful in the succeeding crop, then the green manure crop of buckwheat should be destroyed before a large number of seeds mature.

As noted above, there was a killing frost on this plot on Monday, October 8. However, that is not what killed this buckwheat. This buckwheat plot was killed 3 weeks prior with a light frost. Notice also that the oats and radishes look just fine, even after the first killing frost. 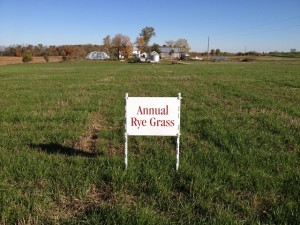 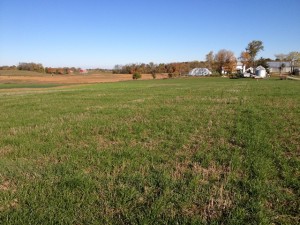 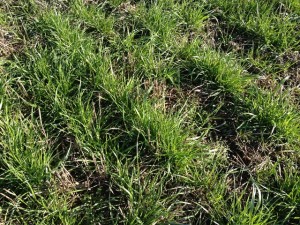 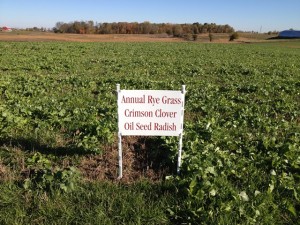 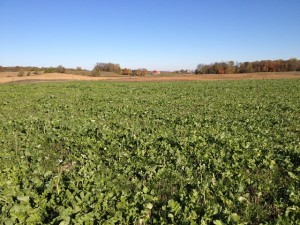 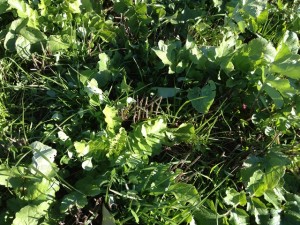 This is a cover crop mix on steroids. Two excellent compaction breakers are mixed with the nitrogen production of the crimson clover. 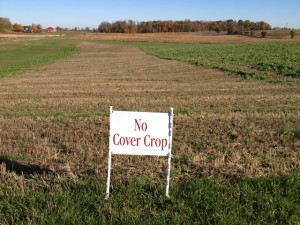 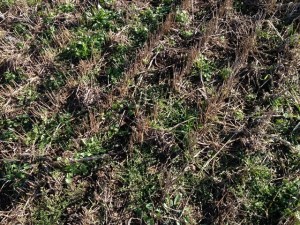 As you can see, where there is no cover crop, weeds are starting to take root.

Thanks to Stacey McGinnis at the Noble County SWCD for this excellent cover crop work. Thanks to Mark Perry from Beck’s Hybrids for sending these pictures to me and keeping me up to speed on the cover crop work going on in Noble County. And thanks to Jim Eiler from Ag Plus in Columbia City for hustling some last minute seed over to this site so they could get everything planted at the same time.

If you’ve not had a chance to get out to a cover crop field day or a cover crop test plot, and there is one in your area, try to schedule a time to take a look. Let the experimenting begin.

Cover Crop Radishes or Turnips as a Cover Crop – or Both?

Cover crop radishes certainly receive a lot of press. I have researched them quite a bit over the past four years. On this blog alone I have over 20 posts about radishes. They are fun to take photos of, dig around in, research, and even play baseball with.

It is hard to pick up a publication that mentions cover crops and not read about radishes and their benefits.  Some industry and university cover crop research leaders like Steve Groff and Dr. Ray Wiel (University of Maryland) have researched radishes for over 10 years.You might say that cover crop radishes are the “Rock Star” of cover crop species these days.

Why are turnips used as a cover crop so little compared to radishes? Are they the “ugly step-sister” of the Brassica family?

Let’s look at some of the benefits of turnips. Some newer varieties (Appin in particular) provide a bulb that is almost entirely in the soil and a deep root system (though a smaller bulb/tuber than the radish).

The turnip tops had nearly 200 units of N/acre.  This was NOT scientific but it is instructive that turnips are an excellent scavenger of N.