My cover cropping and no-till friend Dave from Central Indiana has allowed us to look in at his farming operation this year. (Did you notice I have friends named Dave who plant cover crops?) –  In previous posts Dave has shared about his no-till planting and spraying soybeans into cover crop cereal rye and later he shared about the progress the beans were making in the rye cover crop.  Dave has a knack for photography and farming and I greatly appreciate that Dave is willing to share his thoughts and experiences with all of us. Below is the note Dave sent me about his cover crops and his no-till soybeans. (I am using this with Dave’s permission).

I thought it would be a good idea to snap some final pictures of the soybeans behind my house that were no-tilled into Cereal Rye before we harvested them. It has been very exciting to watch this on-going experiment this season. I am optimistic that this field will yield very well. Since the last photos that I sent you in early July, I foliar fed the field on July 29th, but never had to go back in to spray with Roundup for weed control since the burndown application I made six days after planting. There are a very few random weeds in the field, but nothing of any significance. One negative observation with this field has been that the soybeans got very tall and thus have lodged in some of the darker ground. I planted them at 180,000 seeds / acre in 15″ rows not knowing how they would emerge through that heavy cereal rye cover. Next year I will likely use this same cereal rye cover strategy ahead of soybeans on a much larger scale but will probably back the planting population back to around 120,000 – 135,000 seeds / acre. I also might consider, depending upon the growing season, using Cobra Herbicide at a late vegetative stage to help control the soybean height and also trigger an immune response to help against White Mold. I could see White Mold being a potential problem with this system because of the very heavy residue cover not allowing enough air movement into the canopy. I will probably try to harvest this field next week sometime.

I asked Dave if he saw white mold this year and he replied “I didn’t see a white mold issue this year because the weather turned off very hot and dry. I think if we have average temperatures and average or above average moisture during a growing season, white mold could be a possible problem with this system.”

Now for the photos that Dave sent… 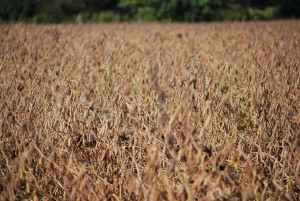 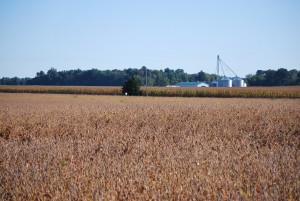 The soybeans are lodging a bit in the darker soils but over-all this field looks awesome!

I was speaking at a cover crop meeting this past summer at Purdue University and I mentioned Dave and this “trial” he was doing and a gentleman came up to me after the meeting and he told me he knew Dave.  He told me that Dave is “the best” farmer he has ever met!  It’s obvious that Dave is an “elite” farmer!