Difficulty establishing cover crops is viewed by some farmers as one of the reasons of why NOT to plant cover crops.  Aerial application has been viewed as “guess-work flying” by some producers because of some poor application jobs in previous years.

However, since the 2011 crop was planted late because of record setting rain in the Eastern Corn Belt, aerial application of cover crops makes the most sense for producers.

In previous posts we have seen how aerial applicators have had opportunities for better training so the “guess work” will be replaced by “art-work” when applying the cover crops.  I’m confident the need for application accuracy has reached the ears of the pilots.  I recently saw corn and soybean fields in northwestern Indiana where the cover crops were flown on beautifully.

However, I did notice emergence differences in the fields.  The cover crop mixture of annual ryegrass, crimson clover, and radish was aerially applied on September 12.

The mix was coming up much faster and more evenly in the corn field than in the soybean field.  It was very easy to see the radishes and ryegrass in the corn field. The corn was “dry up to the ear” at application, and the cover crop looked great.

In the soybean field we had to look for a while before we found anything other than radishes emerging.  I understand that the soybeans were at least 50% yellow leaf, and since all of the leaves are off now, that makes sense.

Since applying the cover crops the farm had received over 4 inches of rain in numerous rain events.

So, what did I take from this farm visit?

After several months of trying to arrange schedules between a number of very busy men we have now set dates and times for training pilots on aerial applying cover crops. Click here for the  CoverCropWebinarFlyer.

There are Two Sessions Available:

Please register for the date and time that works best for you:

Additional training times may be offered if need arises.

These sessions will also be recorded and may be sent to those who could not attend. 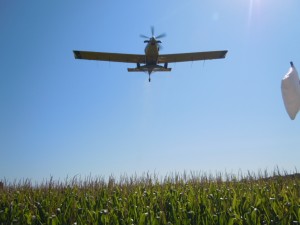 For other posts on aerial application of cover crops click here and also here. 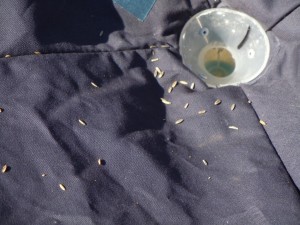 I’m excited to report that there will be a training school in the summer of 2011 for aerial applicators that want to fly on cover crops! The planning for this meeting has been going on for some time with Dave Eby from AgriFlite Services, Inc, myself, and Dennis R. Gardisser, Ph.D, P.E. from WRK of Arkansas, LLC. At this time I am very confident that the training will end up with applicators being certified by the National Agricultural Aviation Association. Our goal is to train aerial applicators on how to apply cover crops so that producers are very satisfied with the end results.

The plan is to offer training to applicators across the Midwestern states sometime in June or July in an evening so that we can get as many applicators trained as possible. Many more details are to be ironed out but I want to let you all know that we are working on this awesome project! For more information contact me at dave@plantcovercrops.com.

I have heard that a number of aerial applicators admit that they are guessing approximately how wide they need to fly to apply different cover crops. I have seen evidence that some of them have guessed wrong!  Two or three years ago an applicator guessed wrong by leaving approximately 80’ wide gaps in a number of fields (of course he charged $2-3/acre less to apply the cover crop…so it was a good deal, right?!?).  These guys might have been okay at the “art of flying” but they did not understand the science of aerial applying the cover crops.

This past August I had the privilege of working with Dave and Garrett Eby from AgriFlite Services in Wakarusa, IN on the science of aerial applying cover crops.  AgriFlite worked with Dennis R. Gardisser, PhD, P.E. from WRK of Arkansas LLC to determine flight patterns, height, and speed with six different cover crop mixes and species.

I was part of the “measuring team” that helped to determine the spread pattern of each of the different mixes.  It was very interesting to see how the wind affected the spread pattern by as much as 12 feet and how Garrett adjusted his flight route to make up the difference (that’s some of the “art part” of aerial application).

After each mix or species was flown on the seeds that were caught in the different “seed collectors” were weighed by a scientific scale (an extremely sensitive scale).    The data collected by this test assured that AgriFlite would not have gaps and skips with the different cover crop mixes or cover crop species they flew on in producer’s fields.  The information gathered is property of AgriFlite and is available for a cost by calling Dave Eby at 574-862-4392.